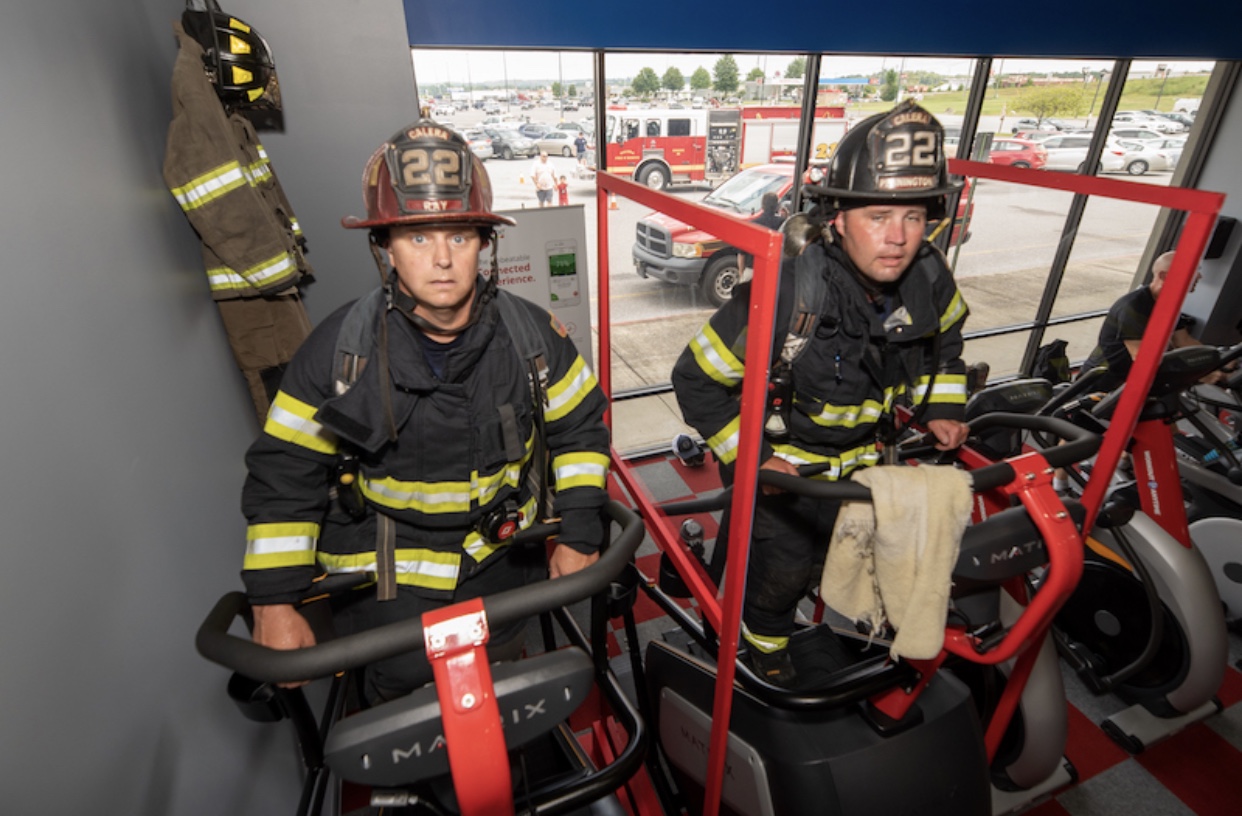 Calera fire fighters, Daryl Ray and Rickey Pennington climb 2071 steps with 60-plus pounds of gear on Sept.11th at Workout Anytime in Calera.

Shelby County Reporter
CALERA — Local firefightets competed in a 9/11 Memorial Stair Climb Challenge on Friday, Sept. 11 at Workout Anytime in Calera.
On the 19th anniversary of the 9/11 attacks, firefighters from the Calera, Chelsea, and Birmingham fire departments climbed the equivalent of 2,071 steps—approximately the number of steps one would have climbed in the World Trade Center in New York City the day of the tragedy.
More than $1,600 was raised toward the Calera Fire Department through the event.
“I was pretty excited about it when I found out corporate was putting together this 9/11 challenge,” said Cedric Bridges, owner and managing partner of Workout Anytime Calera. “It really touched my heart to see how they basically went into these buildings risking their lives. It gave me an opportunity to support my local fire department and give back to my community and to honor all the victims who gave their lives.”
About 10 fireghters and 15 total competitors participated in the challenge. The first place winner was Santonio Gardiner, followed by Nathaniel Gray and Grant Chambliss. The three prizes awarded to the three fastest climbers were a 6-month premium membership to Workout Anytime, 3- month membership and 1-month membership, respectively.

Bridges said some of the firefighters donned full turnout gear while working out on the stair climber to make the challenge as close to reality as possible.
“That gear is heavy; it weights a lot for them to be able to climb. Just try to imagine you’ve got a burning building, and I imagine it’s well over 100 degrees in there,” Bridges said.
Workout Anytime, which opened in March of this year, is located at 225 Supercenter Drive in Calera. Event fundraising was done through a ticket raffle and T-shirt sales. 100 percent of the proceeds went to the Calera Fire Department. Gift cards were donated by Walmart, Cracker Barrel, UPS, Champion Cleaners, Bertolone’s Italian Restaurant, Zapopan Mexican Restaurant, and Podos Ink & Threads.
“It’s going to be an annual challenge every year,” Bridges said. “Next year we plan on making it even bigger and better.”  This is one way we can honor those first responders who gave their lives on 9/11 and at the same time, give back to our local community”. #calera