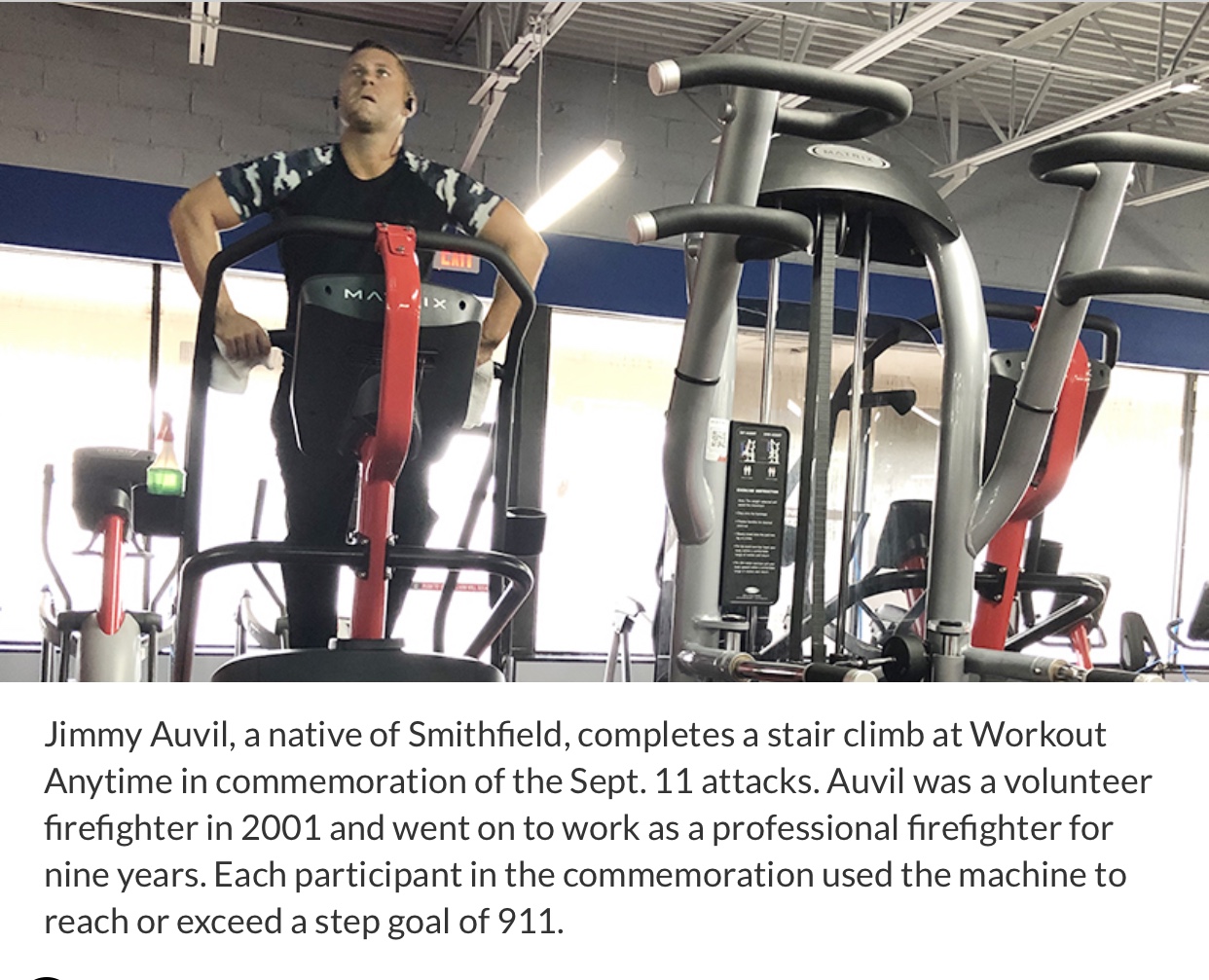 Published 9/15, 2020
In commemoration of the more than 400 first responders killed in New York City on Sept. 11, 2001, Jimmy Auvil of Smitheld went the extra mile, climbing 300 ights of stairs in their honor.
Auvil, a former volunteer and professional firefighter, was one of many who participated in the 9/11 Memorial Stair Climb at Smitheld’s Workout Anytime gym on Sept. 11. Participants used the gym’s stair climbing machine to reach or exceed 911 steps.
“I did 300 floors. Each World Trade Center was 110 floors. I wanted to do at least 220 for both of them. Obviously it’s nothing like what those guys went through that day,” said Auvil, who served with the Carrollton, Franklin, and Portsmouth fire departments.
Overall, nearly 3,000 died on Sept. 11, 2001 in New York, Washington, and Pennsylvania. Now, 20 years on, America’s youngest generations don’t remember that day firsthand. But Auvil, 36, does.
“I remember I was in 12th grade English class when it happened. When they announced it over the intercom, we all went to the library and watched it on live television and I just remember it was a scary thing. Nobody really knew what the final outcome was going to be,” Auvil said.
Clarence Moore, 49, of Smitheld, also participated in the stair climb.
“A friend of mine, he was a truck driver and he was going through the tunnel at the same time it happened in Manhattan,” Moore said. “I have a lot of respect for people in the military because they went through a traumatic moment that day,” he said. “We’ll never forget it.”
Cherie Holloman, co-owner and general manager of Workout Anytime, also remembers- “I was working in the banking industry at the time. I remember our computers went off, our phones — everything just went completely off,” Holloman said. “And we didn’t know what was happening. And then we looked up — we had a screen. And that’s when we started seeing the news just start popping up about what happened.” She was living in Chesapeake at the time. The memories of fear from that day are still vivid. “They told everybody ‘Go home — leave work.’ And I went and picked my daughter up from school because they were letting school out early and just trying to figure out what was really going on. And what really happened was the most intense moment in American history.”Holloman, who co-owns the business with her husband Glenn, said she doesn’t have a personal connection to first responders. She simply has the utmost respect for what they do, and wanted to show that in a tangible way by hosting the event for the second consecutive year.
“I don’t have anyone in my family that I know of or close to me that I know of who is a first responder, but I just respect what they do because that takes a lot of dedication, a lot of patience. Also,  some people aren’t nice to them, so I just respect what they do wholeheartedly. You have to be gifted to do that.”